I’ve finished summarising every scene in Sterkarm 3, in different coloured inks, with emoticons, and many notes to self.
It has been very useful: and has made clear that the time-scale, in places, is impossible.
I have different parties heading off in different directions to roam the soggy, midge-ridden hills while having varied adventures, before finally meeting up again… but the timing just doesn’t work.  Everything that happens to Party B just couldn’t be crammed into the time that elapses before they join Party A again.
I have to admit that I haven’t worked out in enough detail where the places in the story are in relation to each other, how far apart, and what the terrain between them is like.  And, most importantly, how long it would take my characters to get from one place to another, do what I want them to do, and get back again.
I have to do this for six different groups of characters, who’re all in different places, doing different things.  Trying to kill each other, mostly. 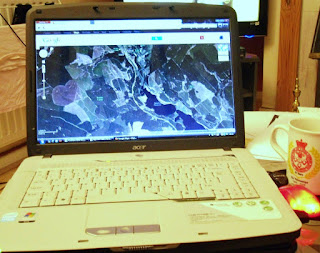 The ‘terrain’ option on Google Maps has allowed me to hover over Sterkarm country, looking down on all the burns and waters, the fells and laws.  I could decide where to site the towers and the Time Tube.  So many streams!  It brought back memories of tramping those hills, meeting deer in the twilight.  I could hear the burns splashing down the hillsides and smell the heather; could hear skylarks and whaups as I hunched over my laptop.
Some of my characters are riding the tough, strong, sure-footed little reiver horses – but how fast could they travel?  I’ve read that rievers could cover 40 miles in a night, but surely that was only in desperation?  Or would they, as Davy suggested, take spare horses with them?  Would 20 miles be more usual?
The riders were ‘light cavalry’, but would have worn helmets and heavy leather ‘jakkes’ stitched with pieces of metal, and carried lances and swords.  Other equipment too: blankets, food, bows, arrows, axes.  And the country was difficult – steep slopes, boulders, scree, thickets and many streams and rivers.  Come on, Karen (aka madwippit) and Kath Roberts, those expert riders– and any other expert riders out there - what’s your opinion?  (And Kath - wow! I like your website's new look!) 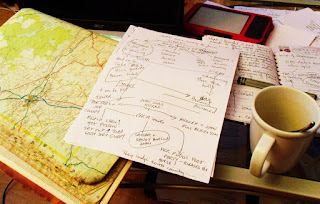 Another party’s on foot.  If they were all fit, strong men, I could use the yomping experience of my ex-army acquaintance, but some of my characters are ill, or unfit - and they’re not all suitably dressed for scrambling over border hills either.  (One is dressed like a 16th century lady, in clothes that would hamper you walking across a room. I should add, this character is a 16th century lady. I've no doubt the rievers had their cross-dressers, but that's for another book.) My guess is that, under the circumstances, they’d be lucky to cover much more than six or seven miles in a day, if that. Walking that country is hard work.

So, can I cut some of the events?  I’ve read through them with a hard eye, while asking those damning questions: Is this scene introducing or developing a character?  Is it introducing or developing something important to the plot?  Is it necessary?  Even so, it’s hard to see what I can lose.  Maybe I just need a good editor.
Can I reduce events by combining  them?  Kill two Sterkarms with one arrow, so to speak.  I’ve already divided the parties differently, so one character doesn’t have to go to and fro so much.
Time, distance, speed - I’m beginning to see what Einstein was on about.
Davy, unable to put his cup down because of my sketch maps scribbled in coloured inks, my laptop open on a satellite scene of empty moors, my index cards and beat-sheets, said, “I dunno why you’re doing all this, getting yourself all of a fash.  You can bet other writers don’t bother.”
Tell him, people, tell him.

And to get you in the Border reiver mood, here's the wonderful June Tabor, from her album An Echo of Hooves -

Oh we do bother, Sue - tell Davy! God knows I'm on the other end of it at the moment, time-wise - trying to get my characters down the Thames in the eyar 2178, after 9 metres of sealevel rise, with all teh bridges down and ruins and shoals everywhere...

But regarding the horses, I used to take my pony across the North Yorkshire fells from Malham to Settle, to be shod at the blacksmith's, a return journey of 12 miles, in a single afternoon. Now that was on a footpath, so not the same as going through deep heather or anything, but most of it would be at a walk or a trot. Considering that one can walk on foot 15 to 25 miles in a day (25 is the longest I've ever done, and I was pretty footsore) I don't think 40 miles in a day for ponies would be unlikely, but at night that would be a different matter. I've got a book somewhere about ancient transport, I'll see what I can find!

I'm looking forward to your year 2178! You've brought the past to life so wonderfully well, I'm keen to see what you do with the future!
And thanks for the inside gen on horses! That's very useful! - and may solve some of my problems. If the horse-riders can move so quick compared to those on foot, they could get a lot done in a day!

I've just been consulting a book called 'Travel In The Ancient World' by Lionel Casson -(which is absolutley fascinating by the way). He doesn't get down as far as the 16th century, his book ranges from ancient Egypt down to about 400AD, and obviously some of it's over roads (Roman, Persian etc) but twnty miles a day seems a good average for travellers on horses or in carriages, and one Theophanes travelling from Pelasium to Antioch in about AD320, did the last leg of his journey, 64 miles from Laodicea to Antioch, in a single day. No doubt on a good road, but it indicates what the horses could manage when pushed.
I'd be interested to know what Kath or Madwippet think though. And have you thought of phoning a Border pony-trekking centre and asking them?

Endurance riding was developed in the 1900's by the military as a cavalry test and the horses were expected to cover 300 miles over a period of 5 days (thats 60 miles a day) carrying at least 200lbs weight.
Nowadays it is a sport and endurance rides are over natural terrain some of which is really demanding. The Golden Horseshoe and Summer Solstice rides are two of the big very-long distance rides over here covering 100 miles over two days - in the US I think it's the Tevis Cup. There's a lot in Aus too.
In the US one of the governing bodies allows 12 hours to complete a 50 mile ride, and 24 hours for a 100 mile ride .
I'd suggest contacting Endurance GB as they were very helpful (or at least Endurance GB South East were) when I was doing a bit of research on Endurance Riding for my last book. They could probably fill you in one all the miseries to be encountered on a long ride too (such as the need to get off and walk periodically and painful feet from the stirrups!). Promise them a nice mention in your acknowledgments, and they'll probably be quite happy to tell you all you want to know.

Yeah - and when I said 'footpath' in my first comment, I meant a track, really - with plenty of ups and downs and boulders (not to mention a mineshaft halfway up the first hill). I did it in winter once when the track was in places covered with meltwater ice over limestone outcrops, and the pony (whose name was Dapple) stopped and wouldn't go on till I dismounted and actually moved his front feet for him to show him where to go. But we knew each other very well...

But remember, you're not using 19th century horses either. And horses do need to rest.

I am currently sad about a favorite book because the timelines don't quite work. One person loses a lot of weight over what should be a long time, at least a week or ten days, and other events bracket it into just under a week. Preventing that kind of thing will keep you out of those books that list Mistakes Authors Made. It may even help the story, to tighten it.

Thank you for all your comments - they're very useful, and I've saved them into my research file. Karen's tips about painful feet and walking especially fired up my imagination - oh, and Kath's comment about moving her horse's feet!
And Tamar - I poured a teaspoon full of cold water into my painful ear! I must have startled the little devil causing the pain, because there was about 5 whole minutes where the pain stopped!

Fascinating-your research and the comments too. Unfortunately I have only ever ridden slightly portly riding school ponies so can be of no help. I hope you get your timelines sorted soon and your vertigo is better too. My Mum gets that and reports that it is horrible!

Much sympathy to your Mum, Sarah! I wouldn't have understood until recently just how horrible it is.