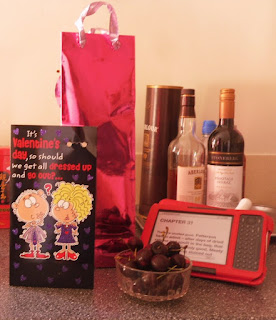 TUESDAY FEBRARY 14TH.  I was working at the University yesterday, and was shattered when I got home – was in bed before 10pm.
Today, having opened Valentine’s card, got on with cleaning the house for an hour – then blog-trotted, signed RLF contracts and got them packed up, answered cries for blogging help from an Author Electric – that sort of stuff.
Have nevertheless been having some thoughts about the book in the initial planning stage.  Am thinking about going back to an earlier idea and changing the sex of a couple of characters.  This counts as progress in book-planning, because there is no forward and backward or up or down – any directions goes so long as it works for the story: under, over, through, sideways.  It doesn’t matter.
(Having called this post 'A Sterkarm Valentine' in an idle moment, I'm now wondering quite what a Sterkarm Valentine might be... A heart on a dagger, as at the end of ''Tis Pity She's A Whore'?  Or maybe the capful of fresh mushrooms left for Andrea to find, as in a deleted scene from one of the earlier books?)
WEDNESDAY 15th.  A disrupted day.  I planned to spend some time scanning pages for my next e-books, and then to get on with the Sterkarm rewrite. However, I was just about to start scanning when I was interrupted by a phone-call – my partner asking me for advice on how to use his computer.  I had scarcely returned to my own computer when the phone rang again – not my partner this time, but a friend of my aunt’s, worried that she couldn’t get through to her by phone. So I had to rush out of the house to check that my aunt was okay – which she was, thankfully, but since I was out of the house, I thought I might as well do the shopping I’d intended to do later.
So by the time I got home and finished the scanning, it was well into the afternoon.  I did jot some notes on the ‘next big thing’ book – but just as I was about to start on the Sterkarms, I got another call from my partner, asking for my help in rewriting a letter for a campaign he’s involved with. So I went over, and now it’s 11pm. So to bed.
FRIDAY 17TH.  Did spend yesterday making notes on the Sterkarm rewrite. Am finding lots of places where I need to make a note reminding me to include something that will be needed later in the plot.  You know the sort of thing – if an axe is needed for some vital plot point in chapter 15, make sure the axe is mentioned when they’re loading the pack-ponies in chapter 10.  And make sure it’s clear that an axe was a bit of kit usually carried – otherwise, when the axe is suddenly produced, in Chapter 15, when it’s needed, it’ll seem that you’re pulling rabbits out of hats.
Am also doing deep thinking about the story spread out on the kitchen table.  Have not only changed the sex of two characters – which has interesting effects on the rest of the story – but have reduced a pair of characters to one.  I always tend to people my plots with too many characters initially.  It seems like a good idea to start with, but then I have to find something for them all to do, and can’t.  So I start whittling them down.
Late on Friday evening, I did some more work on the Sterkarm rewrite.  Am beginning to have baleful thoughts about a main character.
Tomorrow, unless it’s blowing a tempest, I intend to leave work and go for a walk on the Clent hills.
No Blott this week, I'm afraid - he's out on the tiles.
Posted by Susan Price at 00:30

grrrrr stop killing off all the nice people! no wonder Blot is afraid to come down off the roof!

Yes, we had noticed the horrible way you dealt with poor Cuddy A!

Would the capfull of mushrooms be edible, or poisonous? Mind you, poisonous mushrooms are edible all right - it's what happens to you afterwards.
Glad to hear other people carry out these magical transformations, Sue! I ruthlessly take words out of one character's mouth and put them into someone else's, all the time. And I also evaporate characters.
Glad to hear Sterkarm is progressing. I so want to read it..