In Conversation With Jenny Alexander... 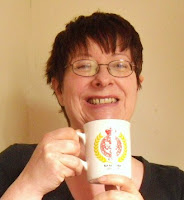 Sue Price: Jenny, when we’ve talked before, it seemed that we were approaching the same place from opposite directions.


Your experiences made you sensitive to dreams and your unconscious life, and in exploring that, you moved towards writing... Whereas I started in a sceptical place, denying any such nonsense as 'the subconscious' or 'meaningful dreams' but, in writing more, was forced to acknowledge both the power of the subconscious and the truth often found in dreams.
Would you agree with that? - and could you tell us more about how you began your dream-work and writing?

Jenny Alexander: Yes, I would absolutely agree, Sue - it was an interesting conversation!


All through my childhood I wanted to be a poet or an artist - writing and painting were my passions.
But I finally yielded to pressure to apply for university rather than art school, and gave up my artistic ambitions. After a while at uni, learning to dissect a text with brutal efficiency, I gave up on writing too.
Sue Price: That is so sad! It must have been torture!

Jenny Alexander: At that point, I had a series of nightmares about killing myself. I would put my finger in a light socket and flick the switch, or turn on the gas fire in my student room and not light the gas.
These dreams felt totally real and terrifying. One night, in my dream, I climbed out onto the ledge outside my room, and sat looking down at the cold concrete four floors below, gearing myself up to jump.
I woke to find that I really was there. I had opened the sash window and climbed out in my sleep. Shaking violently, I somehow managed to clamber back in.
(That's a picture of the Royal Holloway, right, where Jen had this terrifying dream.)
Later that morning, I told my doctor, 'I think my dreams are trying to kill me.'
I felt that I had no choice but to engage with my dreams, and over the next two decades, I became thoroughly familiar with my dream-world, so that when I was ready to think about becoming an author again, there was no anxiety or self doubt, because I knew I had inside myself this abundant, continuous flow of stories and images, and I knew how to capture them.
Could you say a bit about how your writing became an opening into the dreamworld, as I call the unconscious mind, for you?
Sue Price: Your dreams were trying to kill you!
That strikes a chord with me, because there was a time in my life, when I was denying that ‘other’ in my head, when I think my subconscious very deliberately worked against me, although it wasn’t as murderous as yours!
For instance, I would say something quite innocent to someone – something like, ‘How are you?’ -  and hear myself saying it in a way that made it insulting. I had absolutely no conscious intention of insulting anyone, and would be as astonished as the person I’d just offended. But what could I say? I’d just bitten their heads off for no good reason!
It was impossible to explain that it wasn’t me who’d said it! They’d have thought I was mad. Occasionally, I thought I was mad.
I was at logger-heads with what I now call ‘my daemon’ because I was refusing to acknowledge that it existed. It fought me all the way. I’d be writing something and would decide to make some change to the plot. The ‘daemon’ would object, but I didn’t recognise its voice and took it for a mere passing thought, which I’d ignore because I had my plan. I was certain there was only one voice in my head: the ‘I’ voice, which I would now call ‘the editor’.
The daemon took revenge by withdrawing. The piece of writing I was working on would fall over dead. I had to learn that with writing – or, I think, any art – the daemon does the real work! The Editor may make some great improvements, once the real work is finished, but shouldn’t be allowed to interfere with the daemon.
A vengeful, spurned daemon is a dangerous thing, I think – especially yours! Mine not only stymied my efforts at writing, it played those tricks to embarrass me. It was ingenious at finding ways to make such remarks as, “Yes, please,” or “I’ve heard of that,” nasty and cutting.
I had to learn that talk of ‘muses’ and ‘daemons’ was not the arty-farty nonsense I thought it, but a way of talking about something that we don’t quite understand, and don’t have an everyday vocabulary for. I began to deal with writing-problems by saying to the daemon, ‘Solve this for me.’ And it did! The more I trusted it, the faster and more inventively it solved the problems.
I started to give way to it. If it insisted that a particular character should – or shouldn’t – die, I no longer argued, but humbly worked with it to make it so. I discovered that the more I trusted the daemon, the friendlier it became. It stopped playing those tricks on me!
So I paid more attention and ‘heard’ it more clearly. I saw how a piece of writing I’d ‘made up as I went along’ had sub-texts planted in it, and other subtleties that ‘I’ hadn’t planned – so who had? And then I read Kipling’s description of his ‘daemon’ and knew what he was talking about right away.
It seems that your ‘daemon’ was so furious at your moving away from your art – or so despairing – that it wanted to kill you. That’s frightening.
Do you think it was drawing and writing again that made your peace with it?

Jenny Alexander: Well, that was not what I expected, Sue! All my struggles with the daemon were fought within the inner world of dreams, in a quite elemental way, long before I came back to writing at the age of forty. So I hadn't imagined what it would feel like to have to learn to stop fighting and 'humbly work with it' through the process of becoming a writer.
I knew that must happen, and I've watched other writers struggle to let go of the ego position and begin to trust in the ‘somewhere else’ where the real movement and growth of the story happens outside conscious control, in its own time and at its own pace. But I hadn't imagined it, and your description conjures it very vividly, and also the taming of the 'I' in the outer world by these dark forces pushing through and disrupting things.
I met my dark forces in dreams. That's where I learnt the language of symbols and stories, and developed a relationship with them which turned out to be the perfect grounding for a confident and happy experience of writing, and that is certainly how I would describe my career so far.
Thinking about your story, I'm wondering whether this awareness and conscious working with the daemon, which started in the outer world and continued into your writing, is continuing to carry you towards new ideas and ways of being?
Sue Price.  I am always amazed by how many ways there are to write! I had no idea I was letting go of the ego position. It felt – and still feels, often – as if I’m listening to another voice, or being handed an image and ordered to write about it, or almost physically nudged towards an idea. Or pushed away from one! Very much like the voice which all but spoke to me as I woke and said, ‘Make a Green Man mask out of papier-mache.’ I’m obediently making it and I still don’t know why! I’m enjoying it, so I carry on.
But is it carrying me towards new ideas and ways of being? I don’t think so!
For all this talk of daemons and ‘voices’, I continue to be as spiritual as a brick. I am essentially, I think, pragmatic. If something works, use it. I wanted to write, so I used whatever seemed to work, but without, if I’m honest, ever thinking very deeply about it. Unlike you!
I am fascinated by your struggles and fights in the’ inner world of dreams.’ This sounds so much like what I read about shaman’s spirit travels and I imagined for my Ghost World books. It’s quite startling to hear someone talking matter of factly about fighting battles in dreams.
I think we’re out of space for now – but I would love to hear more about this inner world and the battles you fought, if you wouldn’t mind talking about them. Perhaps we could continue this conversation another time?
Jenny Alexander: Absolutely! And in the meantime, how about being 'in conversation with' that Green Man? It would be interesting to know why he's come and what he wants...
Susan Price: There's a thought! I'm not sure I'd get an answer - or if I'd want to hear it if I did!

Jenny Alexander is a highly respected author for children, as well as an expert dream-wrangler! Her website can be found here.


Her excellent blog, about dreams and creativity, can be found here.
I apologise for the failure of the blog last week. This Blott would have been nearly topical then! But I post it, because I like it.
It demonstrates the dangers of excitable and uncontrolled daemons/muses! 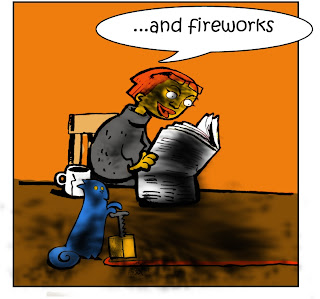 I love blog 'conversations' - so thanks for this.

Sounds terrifying. I'll stick with flesh and blood wippitts and being a second rate hack I think ... :-)

Good to see Blott back too!

Haha - hardly a second rate hack! I guess we don't choose our creative path - it kind of chooses us and as Sue says, it's amazing how many different ways there are to be a writer

What a fascinating peek into the minds of two authors!

Scary dreams, Jenny! I just watched an unsettling Derren Brown experiment about hypnosis where someone fires a gun to "assassinate" another person without knowing they did it... wonder if you think hypnosis is a similar to the dream state?

My unicorn-muse sometimes defends me/my writing and prods other people with his sharp horn - which sounds a bit like Sue's daemon.

I like your blog post. Keep on writing this type of great stuff. I'll make sure to follow up on your blog in the future.
Sash Windows Edinburgh