Since my brother was on holiday, and at a loose end, we decided to take a day out together, and revisit one of the castles that we stormed on a regular basis as children, when our Dad did the driving.
I was in the driving seat this time, and we went to Goodrich Castle, near Ross-on-Wye. It's an impressive castle, but smaller than we remembered it.
Its defences are formidable, and yet it only had to be defended against the Welsh once. I imagine the Welsh took a long, thoughtful look at the cunningly arranged towers, the barbican, moat and all, and moved on to somewhere easier.
But it was the keep that made the lasting impression on us, the oldest part of the castle, of grey stone, while the rest is of red sandstone. It was built in the mid to late 12th century, and was done on the cheap. Richard De Clare wasn't a favourite with Henry II, it seems, on account of his having sided with Stephen against Henry's Mum, so he was a bit short on funding.
When I first visited Goodrich, as a child, I'd never heard of a Pele tower. But this keep exactly matched the usual design of a Border Pele tower: three storeys, with the ground floor used for storage, and the two floors above used for living, with a watch-tower on the roof. A single stair in the thickness of the wall was the only way in and out.
So then we climbed the keep, as you do. Well, it was there. And, good lord, I realised that when I'd imagined the Sterkarms climbing their tower stairs, I'd been thinking of bigger castles, and had given them far too much elbow room.
But the Sterkarm tower would have been quite small and built on the cheap too, because the Sterkarms are only farmers, who have to scrabble about for enough money to build their towers, for protection.
It shows something of how isolated and backward the debateable lands were, that Goodrich Keep was outmoded by 1300, and used only to host second-rate guests, but the Pele towers were still very similar so much later.
I've climbed the stairs in plenty of other towers. I knew they were narrow and twisty. I knew that there wouldn't be room to pass another person on the stairs - well, that was partly the point.
But those stairs at Goodrich! Even in daylight, a section was almost completely dark, and the steps were so narrow that they were more like ledges than steps - and worn ledges at that.
They didn't just twist - they corkscrewed in a tight spiral. It was like turning yourself round on the spot, but climbing up at the same time. And you were touching the walls on either side all time.
And steep! It was like climbing a corkscrewing ladder in the dark - but a corkscrewing ladder with a tight box built round it.
Thank goodness for the stout rope, with large knots, that had been fastened to the central pillar for you to hang on to. 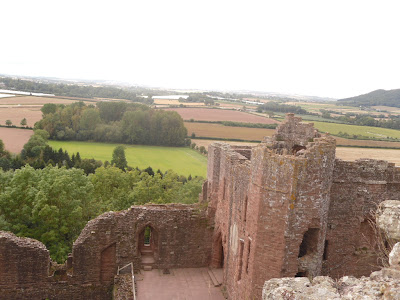 We got to the top, and enjoyed the views over the Wye Valley - but hanging over us was the knowledge that we had to go back down those steps sooner or later.
We wondered how people felt about climbing them on some cold winter's night in 11-umpty-plonk, with nobutt a guttering candle. "I bet they had that rope on the stairs then," I said, "to help them get up."
"They'd have done better," said the bro, "hanging the rope out the window and shinning up and down that way. In fact," he said, warming to his theme, "I can see why Rapunzel was such a popular girl. Abseiling up and down her plaits would have been a sight easier than climbing those stairs."
We did get down - you'll be glad to know that I'm not writing this blog from the top of Goodrich keep. First we put all cameras, sunglasses and other hand-occupying things away in pockets and belt-pouches to have both hands free. We clutched that rope and, in the pitch-dark section, groped about with toes to make sure we found those stone ledges.
"How easy it is to imagine..."  You're always hearing this in programmes about anything historical, and it always makes me want to throw things. No! It is not easy at all to imagine what life was like in the past, even when you try hard. We were startled by the claustrophobic narrowness, steepness and darkness of the stairs - but would someone in 1148 have been? Or would they have simply been awed that the keep had stairs at all? - And was built of stone and had three storeys? Or is that making them too unsophisticated? 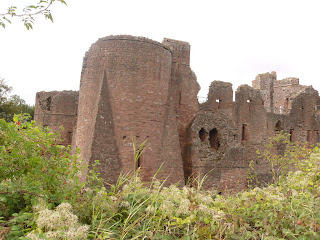 It's the same when looking at the castle from outside. Today, we look at impressive ruins, and they're romantic, picturesque, historic... But even if we could see the castle restored to exactly how it would have looked in, say, 1300, we would still be seeing it through modern eyes, within the framework of a modern, democratic, secular understanding.
It's not easy at all to understand how a fisherman on the Wye, or a farmer in the fields around the castle, would have understood it. Would it have been the stronghold of his oppressors? The home of his employer? The impressive show-home of the local celebrity? The dwelling-place of the God-appointed ruler of that place?
Maybe they saw the castle as a bit of all of the above. Or maybe it was just the everyday and largely ignored background to their lives, as most of the buildings we pass every day are to ours.
But I'm hoping I get a chance to rewrite those Sterkarm staircases.

No Blott this week, I'm afraid. Illness and OU study have combined to keep Blott at home. 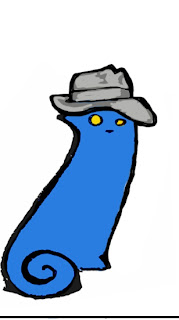 I know Goodrich castle! I used to live near Ross when I was about 12 to 15. And funnily enough I was talking to someone recently who said the name derives from 'Godric': originally it was 'Godric's' castle, and the land was Godric's in Domesday book. So did Godric have a wooden Saxon fort there before the stone castle was even built?

I stormed that castle in my childhood days too! Lovely to see the pics and revisit through your descriptions - thank you, Sue :)

"The Debateable Lands" - what a great title that would make!

Pele Towers aren't a million miles from brochs, are they?

Good to hear from other Goodrich lovers! And yes, it's suspected of having been Godric's stronghold before the Normans came and stole it.

Er - sorry, Joan, have to take issue with the pele-tower/broch equation. They were - I maintain, in the teeth of scholarly opinion - both built for defense, but the best brochs, such as Mousa, were quite a bit different from peles, and arguably, more sophisticated.

Mouse is quite breathtaking when you consider that it's at least 2000 years old, and may be even older.

That's a proper castle - shall add it to my list of ones to visit. Funny what people call castles - spent many happy childhood holidays visiting them with my Dad - some were semi-ruins, others intact but denuded, some turned out to be hillforts, but all were exciting especially when my Dad was so good at explaining the features and the history. Except for the castles that turned out to be stately homes, stuffed with antiques and with don't touch and don't run signs everywhere - a nightmare for a terminally clumsy child with a low boredom threshold.

Like Indiana Blott! He even has a bullwhip tail ...
Hope Blot bro better soon as we miss our weekly Blotfix.

its not only cheap towers that are like this, my wife and i visited worcester cathedral at the weekend and against my miserley instincts paid £4 to climb their bell tower. two hundred steps later the spiral staircase closed up to the point where my shoulders were in serious danger of jamming solid against the walls of the tower. i was less concerned about falling down the precipitous staircase than i was of just getting stuck like a cork in a bottle!

I used to live a couple of miles down the road from Goodrich (near Ross-on-Wye) and remember taking my brother there and nearly losing him in one of the ruined towers. Good castle vibes for a writer!

Kath, when you say you 'nearly lost' your brother, do you mean you mislaid him, or that it was the Tower Perilous? If the latter, I bet it was the keep.
And bro - I know what you mean. I felt that if I stumbled on the stairs, I would end up wedged in them, possibly upside-down.