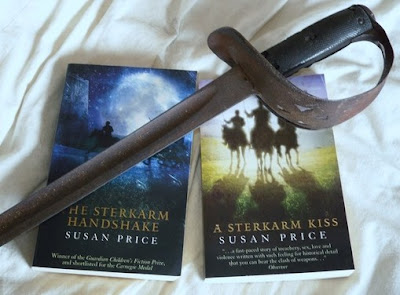 I’ve been reading reviews of my book, The Sterkarm Handshake on Goodreads.  Most of them are good – four and five star.  People say how much they enjoyed the book, and I heartily thank people for taking the time and trouble to post a review – even though they may have done it for fellow readers rather than me.
However, I was struck by how many of the reviews – even the positive ones – took issue with the character of my villain, the Company Executive Officer, James Windsor.
He’s called a ‘one-dimensional character’ and ‘a pantomime villain’.  He even, commenters say, in shocked tones, makes fun of the heroine’s size.
This puzzles me.  Early reviews of the book said much the same thing; and here are later readers saying it.  Could I have got it so wrong?
I don't think I did.
Now I’m fully aware that any writer arguing against adverse comments is going to look like an egoist who can’t take criticism.
But I’m going to do it anyway.  I’ve been publishing since I was 16.  I’ve been taking criticism, constructive and destructive, on the chin for the whole of my adult life.

I don’t quarrel with those who say that the book is too violent, or that the heroine is irritating, or even that it’s boring.  I’ve said the same things of books by other writers, even of books by writers whose other works I’ve loved, so I’m neither surprised nor dismayed that some people dislike some of my books.  I had my reasons for writing it the way I did; but other people would have made different choices, and dislike those I made. Fair enough.
The comments on James Windsor puzzle me, though.  When I write, I obviously create scenes, plots and characters that seem, to me, convincing – since if they don’t convince me, it’s foolish to hope they’ll convince readers.  I characterised Windsor as I did because it’s my observation that there are people like him abroad in this unhappy world.  Not everyone, not even every CEO – but some.
I’m quite glad to think that so many of my readers seem never to have met a James Windsor, but I’m puzzled too.  They’ve never met a bully?  Really?
And yet bullying at work is commonplace.  (Nor is it new: I was talking about this with my aunt, and she told me that she left her first job, 64 years ago, because her boss bullied her so much.)
James Windsor has financial power, and power over employees, and he enjoys using it.  He gets a kick when people have no choice but to obey him.  It makes him feel better about himself – why wouldn’t it?  It proves his success as much as his car, his home, his expensive suits.
That he’s one-dimensional may be true to the extent that, in the books, we see him only with subordinates – or people he thinks should be his subordinates, such as the Sterkarms.  (But he has no hold over the Sterkarms, and they don’t give a spit for him.)
I also think it’s fair to say that Windsor is good at his job, intelligent, witty and, quite often, right.  He makes the mistake made by many ‘civilised’ men before him, of underestimating the ‘uncivilised’, but he’s far from stupid.  He’s just not benevolent.  Take a look round the world and you’ll see plenty of intelligent but malevolent people.
With his equals or superiors Windsor would be charming – well-mannered, witty, friendly, considerate.  With equals, he has a reputation to sustain, and from superiors he has something to gain.  I’m told that my great-grandfather was like this.  Among workmates and pub-friends, towards strangers and such superiors as policemen and bosses, he was ‘a great laugh’: generous, witty, charming.
At home, he made no effort to charm. He terrorised his wife and children, kicking one of his sons senseless for defending a sister, and deafening a daughter by hitting her on the ear with a seven-pound lump hammer.  (He was a blacksmith, and ordered his daughter to hold a chisel while he hit it with said hammer.  She annoyed him by flinching, and he hit her with what he had to hand – the hammer.)  But that night, in the pub, he was ‘a great laugh’.  Does this seem OTT, too melodramatic? - But it's true, and very similar scenes are being enacted on the day you read this, somewhere near you.
A friend in publishing once told me of a writer she was friendly with.  She’d known him for years and they’d always got on well when they met at launches and lunches.  Then, due to the last recession but one, my friend was given notice.  Shortly after, she met the writer again.  They hugged and kissed, and he asked for her news.

She said she’d lost her job, and felt rather depressed, since she couldn’t imagine finding another, given her age and the state of the industry.
The writer replied, “Oh, you’re no use to me any more, then, are you?” – turned his back and walked away, leaving her gobsmacked and speechless.
Very James Windsor. He, the writer, and my great-grandfather were narcissists.  They aren't in short supply, and they aren't always serial-killers.  I think they're quite often in positions of authority, both because they want to be, and because their unswerving self-interest helps them to get there.
As for Windsor’s insulting remarks to my hefty heroine – have my readers really not met people like this?  Really?
While writing Handshake, I met a woman who worked for an executive, and asked her about her job and boss.  She told me, rolling her eyes, that he always addressed her as ‘Gorgeous,’ even calling her this in front of others.
Now, this would be patronising and offensive enough, but it went further.  My informant, though professionally impressive and very well groomed, was fully aware that not many would seriously call her ‘gorgeous’.  Hence the rolling eyes.  Every time he called her that, especially in front of others, it was a put-down.
But how could she complain?  She had a well paid job which otherwise suited her well, which she might lose if she complained.  Even if you don’t mind losing your job, how can you complain that your boss calls you ‘gorgeous’?  But she and everyone who heard it knew that it was a sneer.
Why did her boss sneer at her on a daily basis?  Because he could.  He enjoyed it.
It was this meeting which nerved me to have Windsor speak to Andrea as he does.  At one point he gives her expensive chocolates saying, “I’m sure you’ll know what to do with them.”
Andrea reflects that Windsor’s gifts are payment for the right to insult people.  This is the politics of gift-giving.  At its most benign, it’s an affirmation of friendship – at its less benign, it’s manipulative power-play.  It’s hard to quarrel with someone who gives you expensive gifts – and some use that to get away with bad behaviour.
It’s these experiences, and my own, which lie behind James Windsor.  I don’t think, unfortunately, that he’s unrealistic or pantomimic at all.
But I’d be interested to hear your thoughts.  I will take them on the chin.
Posted by Susan Price at 00:05

No, your chin's in no danger. If I needed convincing that's an extremely well-told string of appalling stories and I expect to be having nightmares about your great-grandfather. No, well, all of them.

Thanks Joan. My G-grandfather's name was 'Savage', and I was interested to read that this was not a corruption of some other word, as I'd supposed, but one of the surnames classed as 'descriptive' - rather as 'Russel' or 'Rufus' means that the name was originally given to a red-head. 'Savage' as a surname means, literally, 'savage, brutal, bad-tempered.' I'm glad to say that this quality seems to have been bred out of my present family.

I don't think he's unrealistic either - he struck me as very credible indeed when I read the book.

But different people have different experiences. My parents-in-law hated The Office because they felt David Brent was just too far exaggerated to be realistic; whereas I found it both compulsive and difficult to watch because I've met people who are so very Brentish.

James W is a great villain! (If he had a soft side, he wouldn't make such a good villain, would he?)

What a brilliant and thought-provoking post! I speak as a writer who has always experienced great difficulty in creating villains, although like you I've met a fair few aggressive and self-seeking people in my life. The most common criticism/compliment/reason for rejection I used to get from editors was that my stories were 'sweet' and 'charming.' I've only been able to make nasty characters in comic contexts. So well done you, on not only creating some mean dudes, but also sticking up for them.

Have you ever shown the villain being with someone who isn't a subordinate? If the critics haven't seen it, they don't know it's there. If all they see is his behavior with people he can bully, that's all they can comment on.

I make the point in the blog, Tamar, that the books do only show Windsor with subordinates - and I admit that I didn't think of including a scene showing him with superiors, although he is far more polite and restrained when negotiating with the Sterkarm leader, because there he has something to lose.
And John - I did reply earlier, but Blogger swallowed my post. I agree about The Office! Had to watch it from behind the sofa, I found it so excruciating - but it was brilliant. If it hadn't been so accurate, it wouldn't have been so painful or so funny.

The only problem I had with Windsor was that I wanted him to suffer something a bit more terminal, rather than Bryce getting snuffed.
I had much more of an issue with Cuddy getting murdered ...
What intrigues me most though, is how you are ever going to come up with as perfect an ending to S3 as as the one in S1 !

I have to confess these are some of your books I've not yet read - but this post makes me even more eager to read them (I do have the first one ready in my huge reading pile!) I promise to give you an honest opinion when I've read it.
I have to say though that I quite like having a really vile villain to hate. And yep, have met plenty of people like him by the sounds of it. Also have to say that the story about your Great Grandfather is quite terrifying.

I thought Windsor was a great villain - particularly his pleasure in humiliating others.