WHAT TO CALL STERKARM 3?

Whatever I call it, there's not much chance it will come to heel.
At the bottom of this post - below Blott - I shall put a link to the first chapter, in rough draft, of Sterkarm 3.
People have asked, what is the book's title going to be?
Well, how would I know?  I've only just finished the first draft.
Some writers start with the title, but that's never worked for me.  In fact, I hate titles.  I find it easier to write the book than come up with a title.
I remember that 'The Sterkarm Handshake' came to me quite late in the writing and rewriting of the book.  It suddenly struck me that it's the name of their family badge, but is said by their enemies to sum up their treachery - and the whole book is about treachery of one kind or another.  So it seemed to me to be a title that summed up the book rather well - but I had doubts because it was such an odd collection of words.  Would it make any sense to people?  Would they remember it?
My publishers were just as doubtful, and I remember drawing up a long list of other possible titles - none of which seemed quite right, even if more usual - and then I had a phone-call from the publishers saying that, on second thoughts, they'd decided that 'The Sterkarm Handshake' was the right title after all.
Since the second book was 'A Sterkarm Kiss', it's been suggested that the third should be called 'A Sterkarm Cuddle' or, even, 'A Sterkarm Shag' - but since a Sterkarm handshake means a stab in the belly, and a Sterkarm kiss means a cut throat, I'd rather not even contemplate what a Sterkarm cuddle or a Sterkarm shag might be.
At one time I was thinking of calling the book 'A Kindness of Sterkarms', playing on 'a kindness of ravens', that ill-omened bird.  But it never felt right.
And then Kath Roberts suggested 'A Sterkarm Cure', because it sounded more like the other titles.  So, its working title at present - when I don't just call it 'Sterk 3' - is A Sterkarm Cure.
Which, of course, is rather like the Emperor Caligula's cure for his nephew's cough.
But I can't promise that it will still be called that when and if it is ever finished and - one way or another - published.

And as I contemplate rewriting Sterk 3, here's Blot on rewriting - 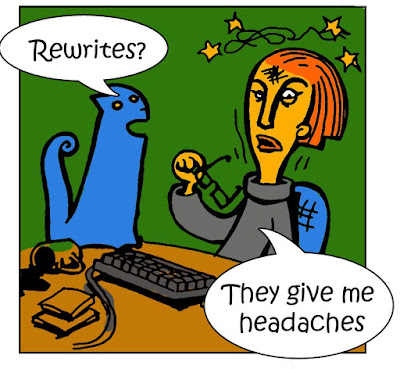 And here, for those who want is, the link to the first chapter of Sterkarm 3
Posted by Susan Price at 00:30

OK, you've written it now, but I was struck by a thought this morning. Would Cuddy B be able to tell the difference between Per A and Per B?

Anyway, off to read now. It had better be a LONG chapter! :-)

That is an interesting thought, Madwippit! - And I've written the first draft - I expect to make all kinds of changes when I rewrite...

Read it and loved it - explosive opening, and I can't think what per is going to do to the Elves when he finds out... can't really suggest titles without knowing more about the plot (don't tell me though) - but my vague feeling is thatthe titles should get stronger as they go. Sterkarm Handshake... Sterkarm Kiss (getting more close up and personal...) Sterkarm Curse?

Noooo!
Right, I need another chapter.
One is not enough.
I need to turn another page NOW

By the way, Blott this week is EXACTLY how I feel at the moment!

I am just about to read it, Sue, with heart in mouth, but madwippit has asked the question that has been on my mind for several years. SURELY, Cuddy B and Per A are the perfect union to make Sterk 3 the most satisfying sequel ever?

(btw, surely it's an UNkindness of ravens?)

I keep looking.
Just in case Chapter 2 has suddenly popped up.

Thank you all - I appreciate you visiting! Mary, yes it's an unkindness of ravens, but it got crossed with a reference to it being a kindness (in the Sterkarm's world) to cut a wounded man's throat.
But Per A and Cuddy B - yes, you and Karen have given me an idea there... As I've written it, Per B doesn't have HIS Cuddy with him, because do you take your beloved hunting dog to war with you? The other hound, Svart, is in later - and does recognise the Sterkarms B. How much more tail-wagging would there be if Svart A recognised his mother, Cuddy B?
Thank you! Brain is whirring - must makes notes!

And Kath - hope you haven't bashed your keyboard quite to bits!

Brilliant first chapter - but how ruthless you are! Am at a bit of a disadvantage as I haven't read the second Sterkarm yet. Must clearly catch up with all possible speed.

Found this awe-full and compelling, Sue, and promising a brilliant Sterkarm 3. Must search out Handshake and Kiss to re-read so I'm ready!

Loved Blott... yes, I too am bashing my head on my keyboard at the moment, because at the moment I have four titles but only two-and-a-half books...

Most impressed with the chapter - and yes, you are wonderfully ruthless! Do you do classes on that? I struggle not to be a wuss and would love to learn from a master!

Is there going to be a Previously On ... bit or are you depending on people to have read all 3? Like Sue I haven't read the 2nd one yet. To look forward to!

That annoying noise you can hear is the sound of impatiently tapping feet and fingers ... as Kath says, get on with it! Or give us Chapter 2 before a Sterkarm whippet-slap ... Sorry. Please. We have all waited so long for this! And of course we want it to be perfect. But we also want to read it asap!

Thank you, all - even the ones who threaten me with whippets or impatiently order me to hurry up!

Lessons in ruthlessness? There's an interesting prospect. I can only say that whenever an idea makes me think, 'I can't have that happen!' I also feel an absolute determination to have that happen, whatever it is.

So when, in The Bearwood Witch, I thought of having the witch eat her cat raw - the cat having been based on my beloved Biffo - I thought, 'I can't have that happen!' - and immediately set about writing the scene. Always push everything as far as you can push it - to the last possible moment, the worst possible thing that could happen. And when you think, 'Oh no!' - push it a bit further.

Not even cooked ... That must be masterclass material! Need to ease in a little, perhaps ... But will try!